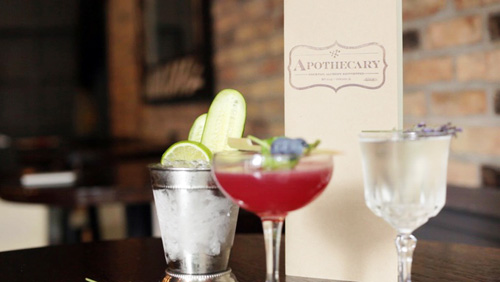 Update:  We have received more information from Cedar Street/FLATS: Apothecary is not confirmed for the lobby space. It is one of several applicants for the FLATS Project small business incubator.  No decisions have yet been made on the lobby space.  In fact, this phase of the competition has not yet been announced. We'll keep you updated as we learn more, but for now -- no decisions have been made about Apothecary or any other applicants for 1020 West Lawrence.

Original Post: Entrepreneur Eric Reid has plans for one of the ground level retail spaces at the former Lawrence House: he'd like to open his vision of an "upscale craft cocktail lounge" called Apothecary. A pharmacist by trade, he plans on offering ten different signature cocktails, as well having as craft beer and wines on the drinks menu.

Of course, dreams must be grounded in reality if they're to come to be.  With this in mind, he has created a Kickstarter campaign for Apothecary, where you can read more about his plans, see a video about it, and donate toward it if you so desire.  The Kickstarter page is here.

If you live in the area served by Argyle Winmore block club (Lawrence to Foster, Broadway to Sheridan), please come to a meeting on Monday night to discuss what happens next at Lawrence House, including a discussion of Apothecary. Argyle Winmore's Facebook page says,


"The next Argyle Winmore block club meeting will be next Monday, November 9 at 7pm in the MLK room at the Institute for Cultural Affairs, 4750 N. Sheridan. Refreshments will be served!

Two agenda items: 1. To hear about and weigh on on the proposal for a restaurant/bar space in the lobby of the Lawrence House (1020 W. Lawrence), which includes a liquor license; 2. More broadly, to talk about reactivating the block club, which has been quiet for the last year. We'd love to hear your thoughts and have your help connecting neighbors to neighbors and making the neighborhood that much better and safer!"


Update: The main topic of discussion at the Argyle Winmore block club meeting will be the proposal from Michael Salvatore, owner of Heritage Bicycle General Store and Heritage Outpost (at 1325 W. Wilson) for a coffee house/lounge.  Some of the highlights proposed include: