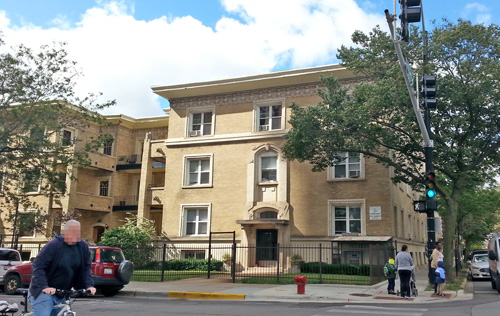 The apartment building at the southwest corner of Clarendon and Montrose is still standing, but the neighborhood around it sure has changed. What a story it could tell.  We're not sure of the date of the older picture, but we do know that it was built around 1905-06.  Given the dirt roads, we guessing this photo was taken not that long afterwards. At that time, it would have been practically lakefront property, since Lake Michigan's shoreline came up to what is now Marine Drive. We know from maps of the era that there were only one to four residences per city block.

Today, the building still serves as apartments. Even the terra cotta detailing along the roof line has been preserved.  The other corners in the intersection are the Stanley Tigerman-designed condo building at 4343 Clarendon (built in 1974) and the former Cuneo Hospital/Maryville Children's Center, which began construction in 1957.
By Kate Uptown - October 01, 2015