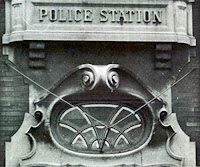 Throwback Thursday! Back to the Eisenhower era, before Amber Alerts and security cameras.  From the June 30, 1953 Chicago Tribune:

Juvenile Officer William Cribbins of Town Hall police yesterday urged Thomas Wellmac, 11, of 843 Belle Plaine av., to stay at home the next time he faces a crisis in his academic life.

Wellmac was found Sunday, sleeping under an overturned rowboat at the Chicago Yacht Club, after he had been missing from his home since Friday morning. Wellmac told Harbormaster Herbert Eldean, 5745 Wilson av., who found him, that he left home because he feared he would not be promoted from the fifth to the sixth grade at the Stewart Elementary school, 4525 Kenmore av.

He learned he had passed when he was returned home.