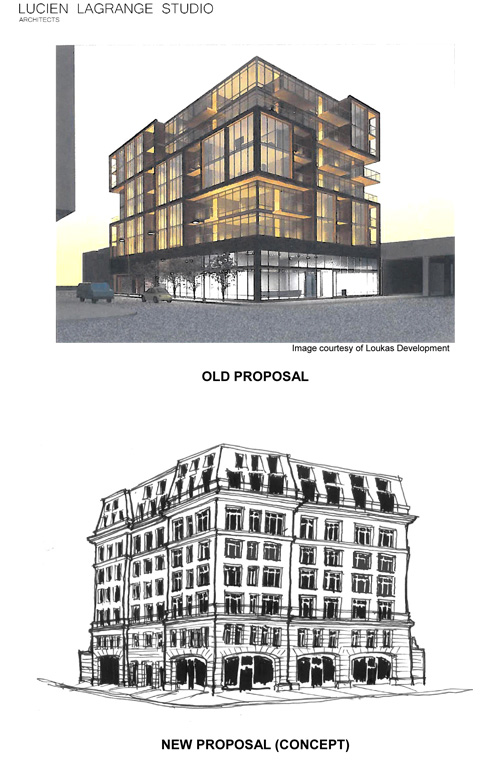 Transit-oriented development is something you'll be hearing a lot more about, particularly if the City Council passes the expanded TOD ordinance, as it is expected to do. With the Red Line going through Uptown, expect to see big changes in the way properties located within a quarter mile of each L station (Sheridan, Wilson, Lawrence and Argyle) are developed.

In his latest newsletter, Ald. Cappleman brings up a new wrinkle in the proposed development of a vintage apartment building half a block from the Sheridan station. You may remember that Loukas Development proposed a modern rehab of one of its existing properties at 3934-38 North Sheffield in February 2014. While the new building would have reflected the style of the one directly across the street, it was controversial. Some people loved the new look; some hated to see a vintage property go, although it was in poor condition. After going through the ward approval process, the plan was dropped. But in yesterday's newsletter, Ald. Cappleman says:


"The 46th Ward has one of the highest number of people who have decided to forgo owning a car, which is one of the major reasons why transit oriented developments (TOD's) are becoming so popular in this area. All indications show that we can expect this trend of people going "carless" to rise, and with that has been an increased interest in transit oriented developments.

A third proposal for a TOD is scheduled to be built next door to the Sheridan L Stop. East Lake View Neighbors reviewed and approved this proposal last year, but the developer made some small changes based on community feedback that postponed moving forward until now. This development will contribute to our tax base and encourage more businesses to open in the area. The 46th Ward is going through an unprecedented amount of development and TOD's are helping to make this happen. Click here to see the plans."