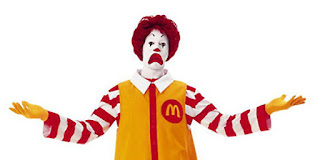 The Micky D's at Wilson and Sheridan was the scene of a double shooting in the pre-dawn hours of Sunday morning. Readers reported hearing five to six shots shortly before 6am, then seeing police and EMTs on the scene. News reports say a 33-year-old male and 24-year-old female were sitting in a parked car in the lot when another car pulled up and someone got out and shot the couple, then took off again. The man was shot in the shoulder and is in fair condition; the woman was shot in the buttocks and her condition has stabilized.

Whatever the reason behind the attack, we are positive that these victims were targeted and it was not random violence.

This is the fourth shooting incident in recent memory to take place at this particular McDonald's, the latest taking place in late June. That restaurant is always busy; we suggest the owners invest in some really good round-the-clock security. This is nuts.
By Kate Uptown - September 28, 2015