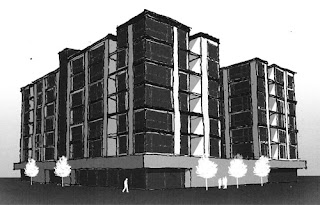 It looks like a go for the second of two new proposed rental buildings on Wilson, with the 46th Ward's full Zoning & Development Committee approving Cedar Street's application for a zoning change at Sheridan & Wilson at its meeting on Monday evening.  From Ald. Cappleman's website:


"975 W. Wilson (SE Corner of Wilson and Sheridan).  Mark Heffron from Cedar Street presented a proposal that includes a zoning change from B3-2 to B3-5 for a 79 ft., 7 story building with 138 units. The developer is looking to have a reduction in parking requirements by proposing 52 parking spaces. This project was presented to the Clarendon Park Neighborhood Association on August 6 and had unanimous support from the neighbors that attended.

At this meeting, members expressed concerns about the architecture, private alley and access for building on the east side of the parcel, less parking and more retail. Money going toward the Uptown Open Space Impact fees were discussed. Result: Zoning change accepted by committee based on the project presented to the community."

This prime Uptown intersection has been empty for far too long, thanks to El Pollo Loco signing a long-term guaranteed lease in the property, then closing its doors in January 2010.  Can't blame the land owner, who was getting above-market rent for letting it sit empty for the duration of the lease. It will be good to see some vitality return to that corner.

We hope to see a better rendering of the proposed project soon.

Sidenote:  An interesting article is here on why Chicago needs more rental units to maintain and grow its population, The Collapse of Rental Housing on Chicago's North Side.