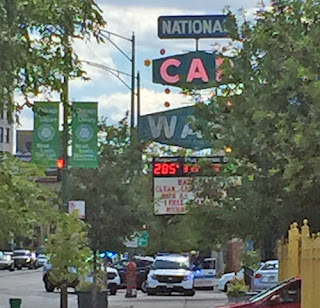 We have reports of police activity at 4900 North Broadway, and are getting reports that someone was shot, although no confirmation.

"Happened a little before 1 o'clock Sunday afternoon. Cops found 8 casings by the car wash at Broadway and Ainslie.

Victim was driven (or drove) to Weiss Hospital in a Toyota Camry with Florida plates.

Cops say the Toyota was followed by a black Chevy Tahoe with four black male occupants who passed the Toyota at Weiss, looked into the Toyota, and then drove off."

With this being just a block south of Argyle, we have to wonder if this is related to the recent upsurge in gang shootings in that area.  These idiots are relentless in their simple-minded quest to shoot one another.

Update:  And now it's confirmed.  The Tribune says, "Earlier, an 18-year-old man was shot at 12:45 p.m. in the 1200 block of West Ainslie Street in the Uptown neighborhood, police said.  The man was hit several times in the right torso and leg, police said. He managed to get himself to Weiss Memorial Hospital, where his condition had stabilized, police said."

The Sun-Times has a different age and a slightly more lurid story:  "A 24-year-old man suffered nine gunshot wounds in an Uptown neighborhood attack Sunday afternoon on the North Side. ... He was shot nine times in the right side of his torso and leg, but he managed to get himself to Weiss Memorial Hospital."  Here's a real non-shock: "The man has documented gang ties, police said." Well, who'd a thunk it?

Update:  The victim was apparently Ryan Thomas, brother of Shaquon Thomas, who was murdered last spring in Uptown, allegedly for taunting another gang on social media.
By Kate Uptown - September 13, 2015