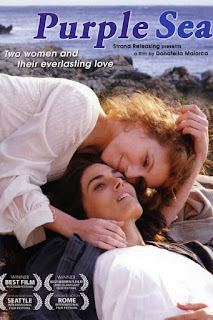 The Queer Film Society, in association with The Chicago Public Library, present The Love That Dare Not Speak Its Name, a free series celebrating Victorian era LGBT movies in honor of Gay Pride month. The series comprises four free screenings taking place on the first four Mondays in June – at the Bezazian branch at 6pm (doors at 5:30pm). All the screenings will feature discussion following the film.  The Bezazian is located at 1226 West Ainslie, and there is a small parking lot on Magnolia

Tonight -- Monday, June 8, 6pm-8pm:  Purple Sea (2009). Based on a true story, this Italian made LGBT film festival favorite is the story of the illicit love affair of Angela and Sarah who must go to great lengths (think Albert Nobbs) in 19th century Sicily in order to protect their romance. In Italian with subtitles.