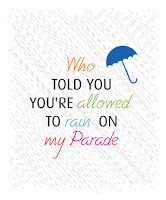 Someone's trying to rain on the parade.

We're getting a lot of reports -- trying to sort it out from scanner reports from Crime In Wrigleyville and what we're hearing from readers. More will be clear as time goes by and more definitive reports are filed. Remember that this is all from preliminary reports.

What we think happened is that there was a six-person fight at Broadway and Wilson. Police broke it up. Traditionally, in years past, Uptown has has gang idiocy break out after the parade because the police are involved along the parade route and in Lakeview. Not so much this year, with the police having a robust presence here throughout the day.

When police arrived to break up the fight, a foot chase occurred. Perps ran away, cops followed. Readers are reporting that they heard a single gunshot near Kenmore and Winthrop (which do intersect, immediately north of Wilson). They thought it was a firecracker, until the police came into the area and told them to get back inside their homes. Immediate scanner reports say someone being chased shot AT the police, a person was taken into custody, a weapon was recovered, and shell casings were found at 4625 Kenmore.

But this is where it gets tricky. Readers are saying that they saw a man with a ski mask and a rifle, on a bike, in the area. Police swarmed the area, and sirens were heard up to 45 minutes after the initial reports. Police vehicles blocked off Kenmore and Winthrop between Lawrence and Wilson, as more police arrived on foot and in vehicles.

The good news is, no more shots have been fired. More good news is, Uptown is absolutely swarming with police. That's something that hasn't happened in past years, which has led to a lot of gang violence. We hope this is the only incident. There's a Channel 2 news truck on Kenmore, according to readers, so we'll see what they have to say.

Additionally: Readers have been asking about the large police presence at Montrose Harbor. The Pride on Montrose festival (formerly Montrose Rocks) is taking place there. We haven't heard of any incidents, but the scanner listeners are reporting that the beach is at capacity and no more cars are being allowed in. Police presence seems to be a precautionary measure. Again, a good thing to have a large police presence in Uptown post-parade. It hasn't been that way in the past, and the criminals know it.

We will update with more information as we learn more.

Update:  As we reported, the alleged shooter was taken into custody after the food chase and after he shot at an officer.  Plot twist: He's 16.  A reader took this photo of the arrests being made on Kenmore. Note that all suspects are presumed innocent until they are found guilty by the criminal court system.  DNAinfo's coverage is here. 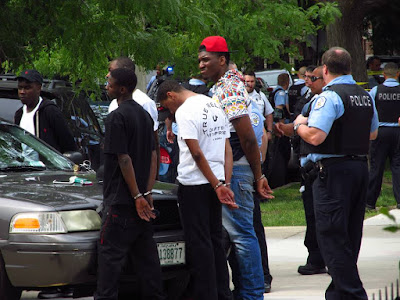