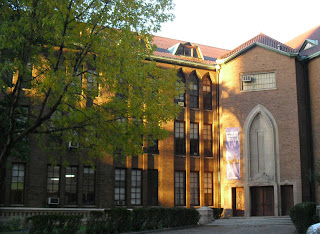 About an hour ago, Ald. Cappleman tweeted: "Victory for our neighborhood schools. Noble will not move to 46 Ward!"

The Tribune confirms in more detail:

After encountering a growing chorus of community opposition, the Noble Network of Charter Schools has decided to abandon plans to open a campus in the Uptown area next school year, officials said Thursday.

The Noble Academy will instead move from its current Loop campus to Chicago Public Schools-owned property on the Near North Side, sharing space next year with another charter school currently occupying part of a site at 1443 N. Ogden Ave."

The entire story is here.

Readers have commented on Facebook that they are concerned about the building at Irving Park and Marine Drive sitting empty after the departure of Lycée Français de Chicago.  While the French school's absence will leave many empty rooms in one of the three buildings on the 3.3-acre site, it remains the campus for the American Islamic College, which has its classrooms, administrative offices, a 1000-seat auditorium, and a 60-bed dormitory there.  It also will remain the home of the Park View Montessori School.

So what will AIC do?  Maybe use the classrooms to expand its own campus. Maybe look for another tenant to replace Lycée Français.  It won't be abandoned.

Update:  The Sun-Times article is here.

Update:  Ald. Pawar explains in his weekly newsletter why he was against Noble Academy coming to Uptown.
By Kate Uptown - June 11, 2015