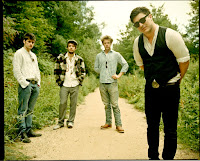 As was announced last April, Mumford & Sons will be playing at Montrose Beach on June 17th.  Last night there was a meeting with the police, the promoter, and the alderman to explain the logistics. A resident who was in attendance sent out this summary:

Some of you may have heard that there is going to be a major concert happening next week, and that would be true.  The folk/rock group Mumford & Sons will be performing to a sold out crowd at Montrose Beach on Wednesday, June 17th.

Yesterday, I attended a community meeting held by our alderman’s office, where a representative from JAM Productions was present to answer questions and address concerns from the community regarding the upcoming concert.
The biggest concern of the community was the impact of such a large number of people coming into the neighborhood.  The promoter and the alderman’s office recognize this; they are working with the city to make sure it is as painless for the community as possible.  Here are some of the solutions discussed.
I am recommending we take a page out of the Boys Scout manual, “Always be prepared”.  No matter how much planning the promoter and alderman’s office have done, things will not run as smoothly as they hope. Please consider the following:
This announcement is going today out so everyone is aware of a major event that will directly affect our neighborhood.  I will send out another email early next week reminding everyone of the upcoming concert; but I wanted everyone to have as much information now, so you can be prepared."

There are also articles in the Tribune (Mumford & Sons Chicago Concert Sparks Residents' Concerns) and DNAinfo (5,000 Bicycles Expected at Mumford and Sons Show at Montrose Beach).
By Kate Uptown - June 10, 2015