Silent Movie Filmed In Uptown A Century Ago Rediscovered, Restored 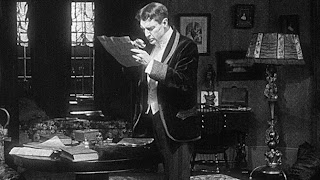 This is so cool.  A silent movie filmed at Essanay Studios on Argyle in 1915 (now St. Augustine College), featuring the only screen appearance by the then-well-known stage star William Gillette, was presumed lost.  Amazingly, a complete print of the movie in excellent condition was discovered last year in the archives of a film repository in France. Now Sherlock Holmes has been digitally restored and will debut at the San Francisco Silent Film Festival on May 31.

No plans for a Chicago showing yet, but the Tribune's Michael Phillips says, "it'd be pretty stupid if this historical Essanay document didn't get a local airing at least in time for the Chicago International Film Festival in October."

Further on in the Tribune article, Phillips writes:  "The stage star was 63 years old when he shot the movie at Essanay Studios on 1333 W. Argyle, in Chicago's Uptown neighborhood, in the spring of 1916 [UU note: The BBC says it was filmed in 1915]. A handful of scenes in "Sherlock Holmes" bring Gillette and company outdoors for exterior shots. These are fascinating slivers of history. Chicagoans will relish glimpses of Holmes stepping out of a horse-drawn carriage, in a cobblestone alley meant to be London but in reality somewhere in Chicago. The West Side? The Gold Coast? Who can say?"

The Tribune articles may be behind a paywall if you've already seen your five complimentary articles for the month, but we'll link to them and trust you can find your way to them: