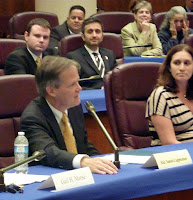 In his weekly newsletter, Ald. Cappleman outlined his vision for the next four years in the 46th
Ward:

"Last Monday, I was honored to be sworn in for a second term as your alderman. Think back about what the 46th Ward was like 4 years ago. The next 4 years will bring more positive changes to the ward as I build on the work that we've already started.

Expect to see the following in the near future:

Earlier this week, I was appointed vice-chair of the City Council Zoning Committee, which means I will be working closely with Ald. Solis, the Zoning chair on all City zoning matters. We are experiencing a building boom in parts of Chicago so zoning is especially important now. In City Council, I will continue to fight for more government efficiency to make sure we are using your tax dollars wisely.

I want to thank all of you for your support and I pledge to make both the 46th Ward and the City of Chicago a greater place to call home. I look forward to serving you for another 4 years."
By Kate Uptown - May 22, 2015