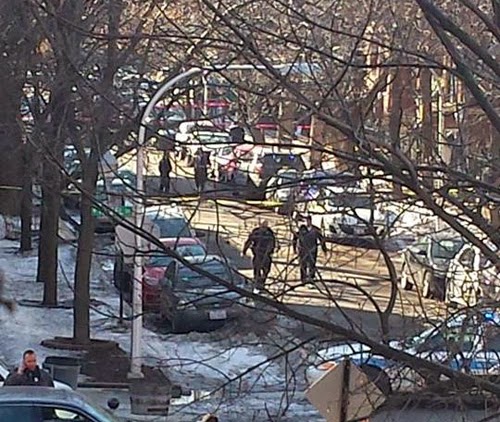 Yesterday afternoon readers reported hearing four gunshots on the 900 block of Agatite, then seeing a man fall in the street after he ran from the alley behind Unique Thrift Store.  The man was declared dead on the scene.  It was a horrific way for our local gangbangers to welcome the warmer weather. It happens every year, a winter's worth of grievances get settled with bullets.

Ald. Cappleman sent out an email blast shortly after he returned from the scene:


"At approximately 2:45pm this afternoon, there was young man shot on the 900 block of Agatite Avenue. The victim was pronounced dead shortly after police arrived. Chicago Police detectives are working with neighbors and nearby businesses to try and gather eyewitness accounts and surveillance footage.

At the time of the shooting there was a large police presence in the area including tactical units and additional patrol cars that were on the scene in a matter of minutes. Police have stated that the shooting is believed to be gang related.  If you have any information regarding this incident, please call the 19th Police District CAPS office at 312-744-0064.

I invite you to attend the public safety meeting this Wednesday, March 11th at 7:00PM at the Clarendon Park Community Center. I encourage you to attend to be a part of the discussion surrounding this incident and overall safety in our neighborhood. I will continue to work with police and neighbors to do everything we can to keep our streets safe. We need your help in continuing to improve public safety in our community."

DNAinfo did an article about the murder, which you can read here.   Our condolences to those who knew and loved the man who was murdered.

Update:  According to the Sun-Times, the victim is Troy Phelon, age 20, whose address is given as being on the West Side.

Update:  According to the police officers at the Clarendon Park CAPS meeting on Wednesday, March 11, this murder did not have to do with drug turf or gang rivalries.  The police believe Mr. Phelon was targeted specifically due to taunting videos and statements posted on YouTube and other social media.  The police officers said he was not a gang member, but was associated with gangs.
By Kate Uptown - March 10, 2015