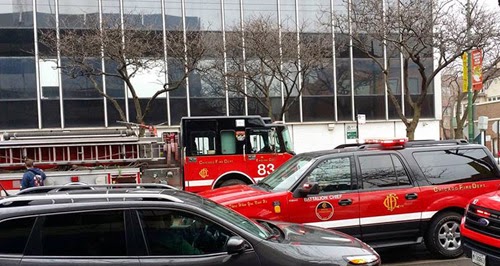 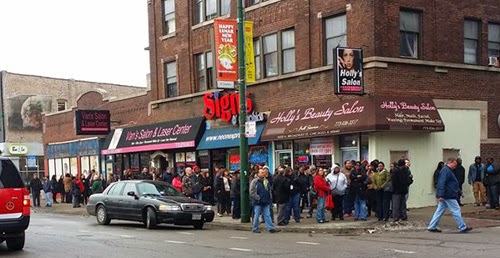 A reader who works in the former headquarters of Combined Insurance, at 5050 North Broadway, reports that there were several explosions under the building this morning, and the building was evacuated.

On Uptown Update's Facebook page, Michael Bliss, who works at a state agency that has offices in the building, reports that at around 9am, several explosions rocked the building so hard that the glass windows shook and all the lights went out.  He could see smoke coming out of the vents on the sidewalk.  Everyone inside got out safely and gathered on the sidewalks surrounding the building.  At one point, he reports that there were over 20 emergency response vehicles on the scene.

Another reader on the scene said, "Broadway is closed between Lawrence & Foster. They have fire hoses going into the building but we could not see smoke. Lots of fire engines, police cars, tv news and such there for about 2 hours now."

Chicago Fire Department Media tweeted that "5050 Broadway was electrical vault fire outside commercial high rise.  Still and box struck out. No injuries."  NBC Chicago reports that the building was declared safe shortly after 10am.
By Kate Uptown - March 10, 2015