Retail Space and Apartments Get Makeovers At 4401 North Clark

Big changes are happening at the northeast corner of Clark and Montrose, both in the "Coorlas Building" apartments and in the storefront that was the former home to Clark Food Mart.

Uptown Update spoke with Mason Phelps, one of the principals with 3F Properties, which bought the building last spring. He gave us some details about the renovated apartments and the available corner retail space.

The building was bank-owned due to the foreclosure of the previous owner. The mini-mart closed in December, and the corner storefront is now empty. It's being marketed for lease by SierraUS Commercial Real Estate. The storefront is 1355 sq. ft.; you can see the real estate brochure for it here.

The storefront will be reconfigured and upgraded from its current condition, including the addition of new windows and doors, to the specifications of its future tenant. Mr. Phelps said that because the building doesn't have on-site parking, the new tenant will probably be one that draws business from foot traffic, such as a dry cleaner, restaurant, yoga studio, or art gallery, although national chains as well as local owners are welcome to come take a look. (The lease of the dental office next door runs for several more years, and that space is not available.) 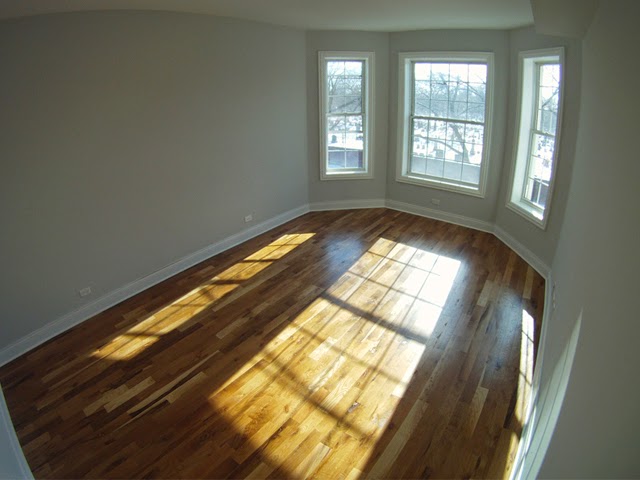 The property, which is actually two buildings (1412-14 West Montrose and 4401 North Clark), dates back to 1908 and comprises nearly 12,000 square feet. 3F Properties began rehabbing the ten multi-bedroom apartments almost immediately upon buying the property, and they are now available for showings after nearly a year of major renovations. This is 3F's first Uptown project, although it has extensive experience in renovating older multi-unit buildings in the Humboldt Park area and single-family homes in the northwest suburbs. 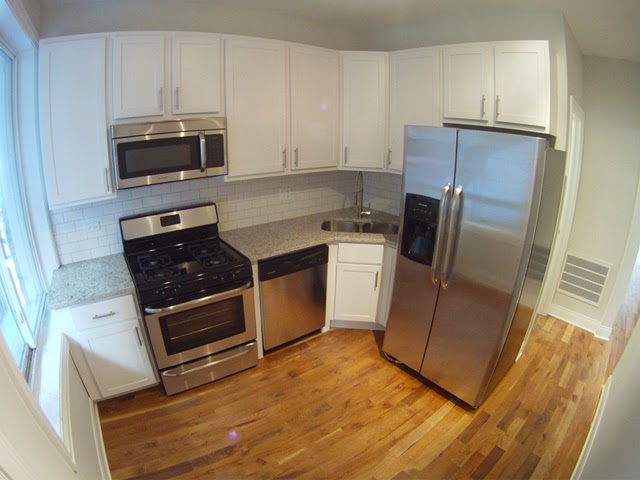 Aside from moving around a couple closets, the layouts of the 2- and 3-bedroom apartments remain the same. There's something very nice about people in 2015 renting apartments that have the same floor plans they had when families lived in them over a century ago. Major upgrades were given to the rehabbed apartments, with new kitchens and hardwood floors in each unit, new decks on the back of the building, and window replacement.

The interior photos in this post are from the website that 3F Properties has put online to market the property. If you go to www.4401clark.com, you can see a list of the apartments' features, more photos, a video of one of the units, and detailed floor plans. It also has contact information to set up a showing if you're interested in renting. Units will be available March 1st. 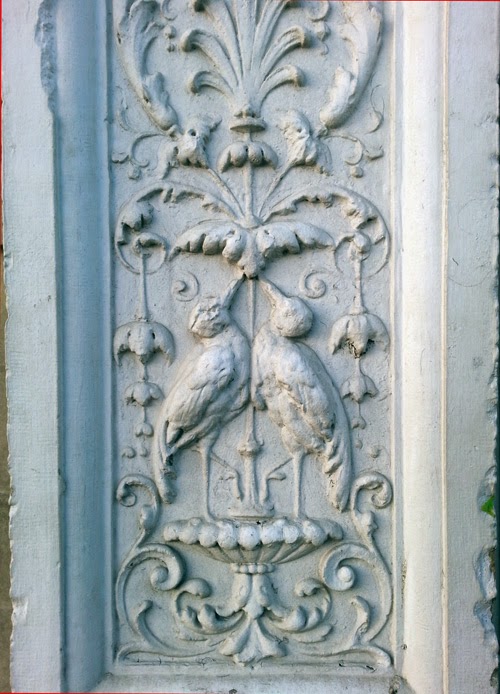 We asked about the vintage detailed terra cotta decorations that adorn the residential entrances on both the Montrose and Clark sides of the building. Mr. Phelps said that 3F's focus has been on the interior of the building, but now that that's essentially finished, they will concentrate on the exterior, including tidying up and refurbishing the somewhat-worse-for-wear terra cotta. It will most definitely be preserved, not only because it's beautiful, but because it's one of the most striking features of the building and one of its biggest assets.

When the building was bought, it was part of the 47th Ward, and has since been redistricted into the 46th Ward. There was no need for zoning or aldermanic approval, since it's a pure rehab with no zoning changes required. We asked Mr. Phelps if there were any plans to eventually turn the apartments into condos, and he said absolutely not. Even if it were in 3F's plans (and it is not), it's doubtful that the building could meet the physical requirements for condo conversion.

Mr. Phelps didn't know the history of the buildings, so we turned to Martin Tangora, who knows more about Uptown's history than anyone we're aware of. We learned that the buildings, described as retail-and-flats, were designed in 1908 by architect W. Mead Walter for Peter Coorlas, whose name is still etched in terra cotta over the two entryways.

Architect Walter is a bit of a mystery, although he apparently designed quite a few buildings in in Uptown and all over the city around the turn of the century. He shared a studio with the famed sculptor Lorado Taft, whose impressive body of work includes the statue "Eternal Silence" at nearby Graceland Cemetery.  In the picture shown (circa 1890), Walter is photographed in Taft's studio, standing to the left.  His design of the Coorlas Building was a bit unusual in that it is retail-and-flats; he did mostly houses and apartments and not many mixed-use buildings.


* We were delighted to find the black-and-white photo at the top of this post in the Sulzer Library's collection, because it shows Los Tres Sombreros, our all-time favorite Uptown restaurant, sadly gone for a couple decades now. It was in the corner space that most recently housed the convenience store, and eventually expanded into the northern storefront as well, although that isn't shown in the photo. Los Tres Sombreros existed in the late 1980s and 1990s, and was owned by Mr. and Mrs. Duran and their three adult sons (the "sombreros" in the restaurant's name). Mrs. Duran made the best mole sauce we've ever had and the menu was based on her family recipes. After Mr. Duran's passing, the family sold the restaurant, but it just wasn't the same under the new owners and eventually closed, leaving fond memories and a lasting craving for margaritas and mole sauce.
By Kate Uptown - February 03, 2015