One Week Until The Election 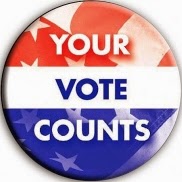 With one local aldermanic candidate first declaring her intention to run in autumn of 2013, it's been a long campaign season, and -- barring a runoff for mayor or in any of the aldermanic races -- it will all be coming to an end one week from tonight.  The polls will close at 7pm on Tuesday, February 24th, and the results will start trickling in shortly afterwards. Barring any technological difficulties at the polling places, we should know before midnight who will be the elected representatives for the 46th and 47th Wards.  (48th Ward residents, Harry Osterman is running unopposed.  But  come on out and vote on the advisory referenda and for your choice for mayor.)

So here's what you can do.  In a word, VOTE.  You can vote at any polling place in the city now through Saturday, 9am-5pm.  Here's a list.

No voting will take place Sunday or Monday.

Election Day is Tuesday. If you vote then, you must vote at your local polling place. Polls are open 6am to 7pm.  Check for your polling place here.

By law, there will be no grace period voter registration after Saturday.  Another reason to vote early.  If you're not registered to vote, and you don't do the grace period thing by Saturday, that's it.

We see a lot of strong opinions on this blog and on Uptown Update's Facebook page.  Here's your chance, a chance that comes up only once every four years, to take those opinions and have them count.  Vote for the candidate whose views are most closely aligned with yours.

Your next chance to vote for the leader of your ward and your city won't come until 2019. Do you really want wait that long to make your opinions known?
By Kate Uptown - February 17, 2015