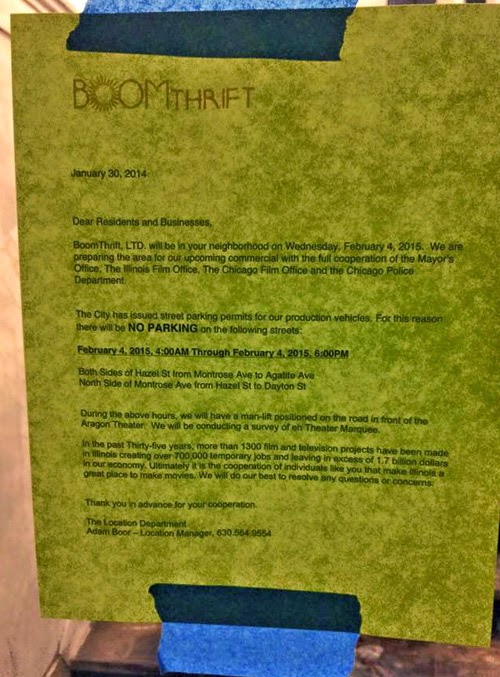 A reader posted this photo to UU's Facebook page Tuesday night about a commercial filming in the Clarendon Park area near Hazel and Montrose on Wednesday, and also somehow involving the marquee at the Aragon Theater.

He said, "Came home today to find this taped to my building's front door. The letter is dated January 30th, but this is the first I'm hearing about these closures. I don't own a car anymore but I feel like this BoomThrift operation did a lousy job of notifying residents. P.S. Food Town will also be closed tomorrow due to the filming."  [UU Note:  Another reader had mentioned seeing no-parking notices a couple days ago, and had asked if anyone knew what they were for.]

The notice is a little hard to read, so here's a transcript, as far as we could make it out:

BoomThrift, LTD. will be in your neighborhood on Wednesday, February 4, 2015. We are preparing the area for our upcoming commercial with the full cooperation of the Mayor's Office, The Illinois Film Office, The Chicago Film Office and the Chicago Police Department.

The City has issued street parking permits for our production vehicles.  For this reason, there will be NO PARKING on the following streets:

In the past Thirty-five years, more than 1300 film and television projects have been made in Illinois creating over 700,000 temporary jobs and leaving in excess of 1.7 billion dollars in our economy. Ultimately it is the cooperation of individuals like you that make Illinois a great place to make movies. We will do our best to reolve any questions or concerns.

Thank you in advance for your cooperation.