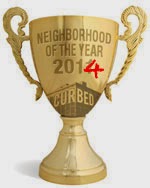 Uptown is back in the running for the Curbed Cup, the annual end-of-the-year contest for the best neighborhood in Chicago sponsored by the website Curbed.  Uptown won the first two years, then was barred from competing for the next two.  Now we're in the running again.

Uptown's first "opponent" is the West Loop.  Voting goes for 24 hours, and then the winner goes on to battle another neighborhood in the next round.  No registration is required, just a click.

Here's what Curbed has to say:  "Uptown has long been a fan favorite, as the North Side neighborhood has previously won two Curbed Cup victories. And it makes sense — the neighborhood has a very active online presence and residents who take the extra effort to promote their 'hood. Uptown sports some of the city's most popular destinations for live music, but it will also soon become the first neighborhood in Chicago to have a shared street. More recently, the neighborhood played dress up for a cameo in the upcoming Batman vs Superman movie, and served as the fictional Gotham City."