Tuesday: The Return of Helen Shiller To City Government? (Updated) 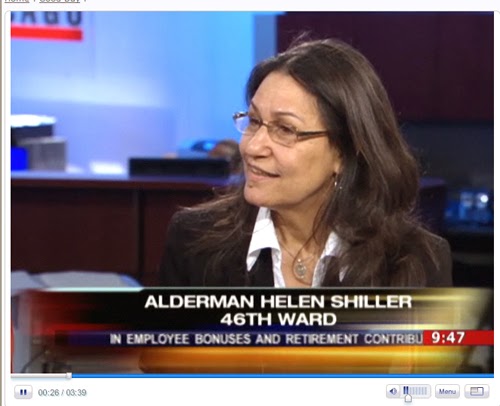 For those who still follow the exploits of former 46th Ward alderman Helen Shiller, here's a little tutorial on how Chicago works.  You can have a horrible job interview, you can be considered far from the best candidate for a job, but if you've worked with the people who are voting, they'll probably give you the job over better-qualified candidates.

Ms. Shiller has been pressing hard since at least last December to become the City Council Financial Analyst.  It's a newly created position for someone to analyze data for the aldermen, an office created to avoid another instance of the City Council voting for another lousy deal like the parking meters.  It pays $107K a year, more than she ever made as alderman, and presumably more than she's currently making as a lobbyist.  The office of financial oversight is the brainchild and baby of one of Uptown's three aldermen, Ameya Pawar of the 47th Ward.

According to the source who spoke with the Sun-Times, when it came time to interview with the selection committee, Ms. Shiller "rambled" (anyone surprised?)  Others of the nine or ten candidates for the job were far more specific about how they would approach their duties, according to the Sun-Times.  Some people think a former alderman shouldn't have the job, and that it should go to someone fresh, someone with no existing allegiances to City Council members.

Yet -- there are four votes needed to win the job.  And Ms. Shiller has three of them in hand.  She's got the support of her former colleagues, Alds. Carrie Austin, Ed Burke and Ray Suarez.

We do agree with Ald. Carrie Austin on one point:  "No one could be more expert than Helen because she knows our system. She has worked this system 20-some odd years."

Read the whole story in the Sun-Times, and see how the voting goes on Tuesday.


Update:  You didn't think there'd be anything like consensus over anything involving Helen Shiller, did you?  The selection committee is deadlocked -- three want Shiller, three want other candidates, and one said he or she will abstain from voting.  They'll be back at it in September to try to get someone chosen.

The real juicy bit is that Ald. Pawar, her own alderman, apparently has been lobbying against Ms. Shiller's fitness for the position.  And City Council doyenne Carrie Austin is livid about it.

As for the committee selection member who indicated that he or she would abstain from voting?  Wimp.  You have one job and that's to select a Financial Analyst for the City Council.  That's it.  If you can't do that, well, move on over and let someone who's willing to do that job take your seat.