Water Tower Coming Down; Clark Street To Be Closed Thursday 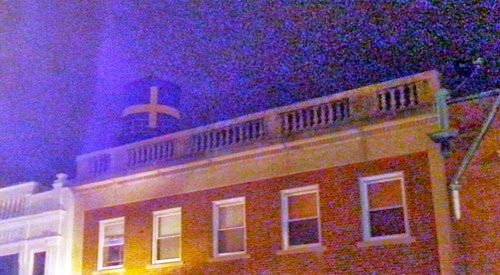 Today is the end of an era for Andersonville, as the water tower on top of the Swedish-American Museum, located just north of Foster on Clark Street, is removed, probably permanently.

It's unfortunate from a historical point of view (it's been up there since 1927), and also from a traffic point of view.  Be advised that if you attempt to travel on surface streets in the Foster/Clark area, you're likely to hit some gridlock.  We imagine that pedestrian traffic, especially on the east side of the street, will be restricted as well due to safety concerns.

"Below is an update from the Swedish American Museum regarding the Andersonville Water Tower. Please be aware of tomorrow's street closure and plan accordingly. The collective goal of the Swedish American Museum, the Andersonville Chamber of Commerce, the 48th Ward office and community members is to see the water tower preserved. It is yet to be determined if it can be repaired and we will share more information as it becomes available.


"As many of you have heard from the news and media, the water tower tank on the roof of the Swedish American Museum has sustained severe damage due to the extreme winter weather we experienced this year. As a result, we need to remove the tank from the roof immediately.

The removal is planned for Thursday, March 20, starting at 6 a.m.  This is a process that most likely will take all day. During a portion of the removal we are asking that the street be completely closed off to through traffic. Though we hope it will be possible to keep one lane open for most of the time, we do not know at this point if that is going to be possible. The street closure will be for the 5200 block of North Clark Street. North bound traffic on Ashland and Glenwood will not be affected.

Our main concern is safety for all. We understand that this will be an inconvenience for everyone in the Andersonville area and hope that you will work with us as we work to ameliorate the situation in the safest and fastest way possible.

We thank you for your support and understanding during this ordeal. We are doing everything we can at this time to repair the water tank so that it may remain in the neighborhood, but if the worst happens we will find a new iconic way to honor the Swedish heritage of Andersonville with the support of neighbors and friends like you."