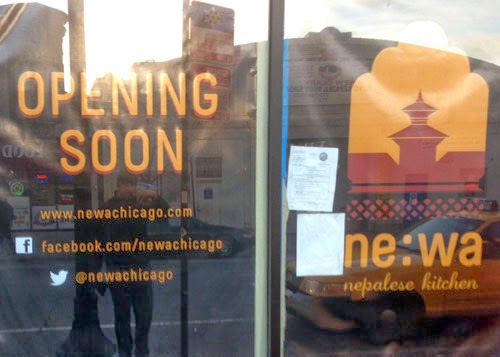 It was just about a year ago (March 20, 2013), when UU broke the story about a new Nepalese restaurant opening on Clark Street.  The news got picked up by a lot of local blogs, particularly the foodie press.

Ne:wa had a website with photos of their food, and a Facebook page showing the interior.  We were very much looking forward to sampling their food.  They had hoped to open in July, but didn't.  They did open briefly for the Taste of Andersonville Dinner Crawl in August.

Then nothing.  We've been checking back intermittently to see what, if any, progress has been made and if there's an opening date.

Draw whatever conclusions you'd like from that, but we're sorry to see someone's dreams and hopes not come to fruition.  We'd looked forward to seeing them open and adding to the diversity of our community.

Update:  We heard from someone close to the situation and it's a horrible story.  The owners of Ne:wa hired someone to act as an "expeditor," to get them through the permitting and build-out phase of opening a new restaurant.  As we've seen time and again, it's an arduous process, full of red tape, inspections and delays. Apparently they were nearly done with the build-out and on the verge of opening when -- you guessed it -- the "expeditor" disappeared.  As our source says, "He basically robbed them of all their money ... and [they] didn't even pass all of their inspections." Heartbreaking for the owners who got so close to seeing their dream realized, only to see it stolen from them.  The storefront sits abandoned and the restaurant's owners cannot be contacted.

We're posting this to get it on the record. If you are opening a business and someone approaches you promising to take care of everything, don't give him access to your funds. Pay as you go. Check references. And if someone says that they were involved with guiding Ne:wa through the permitting process, run away and change your passwords!
By Kate Uptown - March 19, 2014