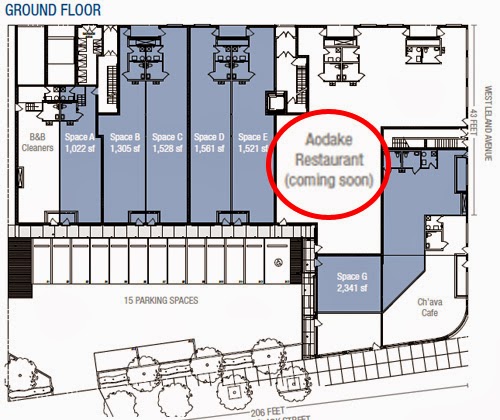 When UU posted last week about a possible new tenant coming to the former Blue Ocean restaurant space, we noted that the principal of the corporation requesting the liquor license had the same name as the principal of a suburban steak and sushi restaurant.

Today it was confirmed by the promotional materials for the site that Aodake Restaurant will be the new tenant of the space, if all the permitting goes through.  Aodake has two locations in Romeoville and Darien that feature a Hibachi grill and a sushi bar.  It's been around since 2006. You can read more about it at the website.

No timeline for opening yet, since the licensing process for a restaurant with liquor just began.

The materials for 4650 North Clark, formerly known as Vis Vitae, also note that the development is under new ownership, which is good news since it went into Chapter 11 back in 2010.

All the retail spaces in blue, above, are available for lease, and spaces A through E can be combined.
By Kate Uptown - February 10, 2014