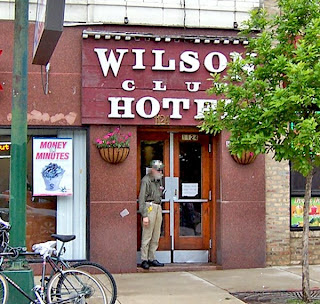 This morning, Ald. Cappleman announced that he and the Department of  Housing and Support Services (DFSS) have secured funding to provide in-house case management services for the residents of Uptown's cubicle hotel, Wilson Men's Club, located at 1124 West Wilson.

Beginning this week, Inspiration Corporation will have a case worker with an office inside the hotel on a full-time basis to help the residents obtain services they are eligible for and to become more self-sufficient.

As long-time readers may recall, the chicken-wire cubicles inside Wilson Men's Club are smaller than the City of Chicago allows residences to be (50sf, with no windows -- while the city requires sleeping rooms to have an area of at least 70sf with a window to provide light, air and an escape route).

According to the press release, the small living areas inside the hotel have been partially addressed.  "Owner Jay Bomberg is now providing a kitchen area for residents to heat up meals and dine inside the facility. He has also created room for a meeting space for different types of support groups. A larger room on the first floor will provide additional living space for the men to gather, watch TV, or stay cool during the hot summer months."

Since loitering outside the hotel has been problematic, particularly during the sweltering summer months, a cooled common area, as well as a place to eat and prepare food, seems like as good a solution as any when dealing with housing that is legally allowed to dodge the City's minimum requirements.

Given the situation, we applaud Ald. Cappleman, Inspiration Corporation, and DFSS for providing assistance for men who find themselves in a situation where a chicken-wire cubicle hotel is an option.  In a statement, Ald. Cappleman says:  "While cubicle hotels have long been criticized for their poor living conditions, we’re on the path to making life much better for these men.  As one of two cubicle hotels left in the City of Chicago, my ultimate goal is for these residences to be brought up to the same standards and requirements as all of the other residential buildings in the City."

UU Note: The hotel has been for sale for quite a few months now (for $3.25million).  According to the listing on LoopNet, it is now "in contract."  The listing on the broker's page has no such notation.  Time will tell.
By Kate Uptown - December 11, 2013