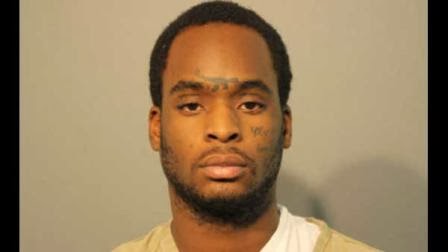 The AK-47 tattooed on Kelsky Patterson's forehead may be truth in advertising.

He has already been charged with the shooting of the 14-year-old boy at Wilson and Broadway over Labor Day weekend.

Today he was charged with the murder of a man and the shooting of four others at Uptown Baptist Church in August.

So in two weeks, he is charged with the murder of one, the maiming of another (who had to have amputations due to his injuries), shooting a young man in the head, and injuring three four others.  (We forgot about the additional person injured when the 14-year-old was shot in the head.)

Busy couple weeks for the 21-year-old, who gives his address as one in Bronzeville.  We hope, if found guilty, that he has lots of time in prison to reflect on "What I Did Last Summer."

Lesson One:  It's not hoards of people terrorizing Uptown.  It's a few people who have no regard for the community, its residents, or anyone except themselves and their gang alliance.

Lesson Two:  When someone has a firing weapon tattooed on his face, believe what he's saying with that.