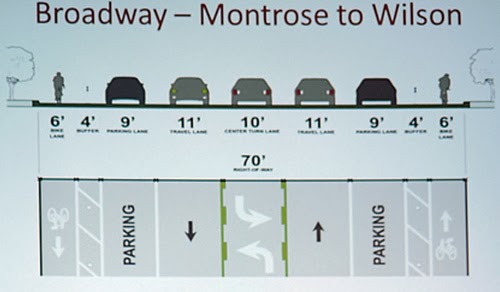 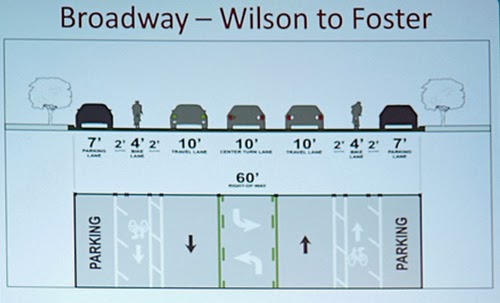 
"Bike lanes will be installed on Broadway from Ainslie down to Montrose within the next several days. Weather permitting, the project should take about a week. The way the bike lanes will be laid out is described below.

The process to decide this started last year when some residents submitted the proposal as a participatory budgeting item, one of the many such projects funded with use of the Ward's $1.32 million menu funds. The Chicago Department of Transportation (CDOT) completed a traffic study to confirm that the traffic on Broadway was light enough for the project to succeed. This project received wide support from community residents who voted to have this project take place.

I want to personally thank the many people who worked so hard to make this happen, especially the members of Bike Uptown, a great organization that remains focused on promoting "complete streets" which will enhance business development and encourage more foot traffic."

For graphics and more information about this project, check out Uptown Update's post from last week.
By Kate Uptown - November 07, 2013