Nick's Uptown To Close Its Doors -- Bought By Thorek? 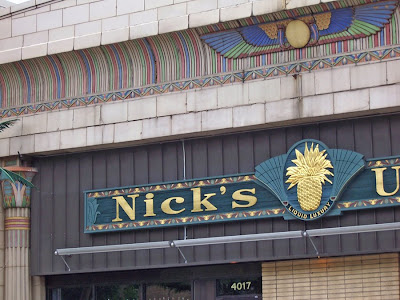 Nick's Twitter feed confirms part of the story:  "It's true! Saturday we will open our doors for the last time. Be there to send us off!"

We are sad to be losing a wonderful bar and meeting space.  Lots of good memories of evenings at Nick's, and some of them even sober!  Nick's has been a great community asset, allowing aldermanic forums to take place there, as well as Buena Park Neighbors social events, Buena Bunny basket making, and Fix Wilson Yard info sessions.  They've even sponsored free concerts in the park, and held donation drives for Inspiration Corporation and Community Building Tutors.

If the unconfirmed part of the tip is true -- that Thorek Hospital has bought the building -- we are extremely concerned that the nearly 100-year-old Egyptian motif building will fall victim to Thorek's insatiable wrecking ball.  It dates back to 1920, when America went mad for Egypt and its pyramid excavations, and the building's construction predated the discovery of Tut's tomb by two years.  Its original purpose was an auto showroom for the then-popular Hupmobile.

We would hate to see such a beloved Uptown treasure become next year's empty lot.  No confirmation at this time, but the rest of the tip has proven to be true.  Take it with a grain of salt.

Update:  No salt necessary!  DNAinfo has confirmed that Thorek has indeed bought the building.
By Kate Uptown - September 05, 2013