Around 6pm, 15 to 20 gunshots were heard by many readers.  We are getting multiple reports of where it happened, but the most detailed description is:

"15-20 shots fired Wilson and Sheridan.   On the SW corner (in front of Church), White newer Toyota Hyundai car sprayed shots into another person/vehicle.  Cops are on the scene.   Shooter car tore ass Westbound towards Broadway.   Occupant of car, black male in blue hat."

No reports yet of anyone being injured, but there are multiple ambulances at the scene.  More details as we hear more.

Update:  From witnesses, it seems as though there was at least one fatality, and at least four people on the ground hit by bullets.  All unconfirmed at the moment.  This happened in front of Uptown Baptist Church.

Update:  CBS2 is reporting that one person is dead and five have been wounded.  And an assault rifle was used.

Update:  No ID on the man who died yet.  Police are all over the area because of the strong possibility of gang retaliation.

Update:  Channel 7 has a report that five people were shot, but nothing we don't already know. Ditto for WGN.  They'll probably update as the evening goes on, so hang on to the links.

Update:  Sensitive material here -- CBS has backed off its initial report of a fatality.  It is now reporting that five males were shot, and their conditions range from extremely critical to critical to good.  An eyewitness says on the Facebook page that he saw someone shot in the head.

Update:  Fox Chicago has a report about the shooting.  One victim extremely critical, three serious to critical, and one in good condition.

Update:  The Tribune has interviewed witnesses and confirmed the white car speeding from the scene.  A commenter says the car was abandoned in front of 4848 West Sheridan, near Argyle ("The shooter abandoned the white Hyundai Sonata car opposite the bldg at 4848 N Sheridan. Cops are out here in full force taking pictures, etc.").  Fox News has updated its report to say a victim has died. 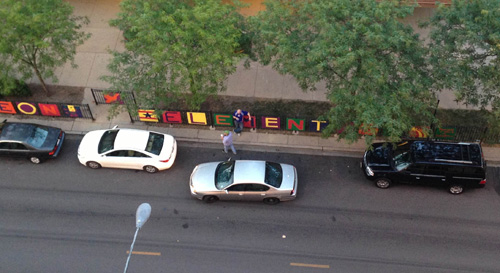 Update:  The car used by the shooters was found in front of McCutcheon School on the 4800 block of Sheridan.

A reader says he "was out for a walk right after the shooting. A Police car came up Sheridan northbound with lights and sirens on and stopped next to a white Hyundai parked in front of the school." When he returned to the scene later in the evening, "multiple police cars were parked by the car on Sheridan and near 1006 Ainslie. A few SWAT guys were even at Ainslie and Sheridan. There were multiple cops looking for a gun in the alley between Kenmore and Sheridan, 4900 block. One cop walking down alley mentioned shooter may have gone in 1006 Ainslie (a constant hot spot and residence of a few who were rounded up a few weeks ago) and said something about 4848 Winthrop as well."

Update:  According to Fox Chicago, people who knew the shooters and victims say that it was gang-related.  One person is in custody.  People living in mid-rises and high-rises in the area are being asked for their IDs and being searched as they enter their buildings.

Update:  The Tribune says that two of the victims had gang affiliations.  The men who were shot ranged in age from their 20s to 50s.  We don't know how many were uninvolved citizens who happened to be in "the wrong place at the wrong time" -- which is a ridiculous phrase when applied to people being on church property while a prayer service is being held and meals are being served to the hungry.  If anyone was in the wrong place, it was the shooters.  The Tribune contradicts Fox Chicago and says no one is in custody.

Update:  We are still not aware of the names of any of the victims.  Remember that their families and friends are grieving, and that not only did five people's lives change course in the matter of 30 seconds, but the lives of the people who love them did as well.   Most of us can't imagine getting a phone call with the news the victims' families got last night.  We ask that you keep them in your thoughts.  This is what the Tribune has to say:

Update:  According to the live WGN News at 6am, all five men are alive.  The man who was reported to have passed remains in the hospital on life support.  WGN is saying that four of the five victims had gang ties.
By Kate Uptown - August 19, 2013