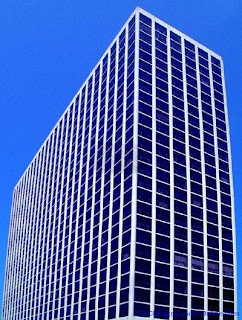 If you know anything about Chicago architecture and design, then you know the name Stanley Tigerman.

What we didn't know, and what might be a surprise to you, is that Mr. Tigerman designed 4343 North Clarendon.  Tomorrow night he will be honored there.

Reinvention: buildings like people go through life cycles. So do neighborhoods. Built in 1974, Boardwalk Apartments, once an upscale rental building, is now referred to as 4343 North Clarendon, a condominium. Tigerman, now in his 80s and his beloved first high-rise project, are due to be reunited after nearly 40 years.

At the tip of Buena Park and Uptown, this landmark building towers over a neighborhood buzzing with a new vibe after a lackluster 25 years: there is a new upscale building set to be built on the corner and a new Alderman, James Cappleman; Mayor Emanuel and other leaders are championing the revitalization of Uptown as a mecca for music to rival its historic past. This summer, the Wilson CTA station is about to begin an extensive multi-­‐million dollar renovation.

Some things however, never change. Tigerman’s design for the masses was a direct result of his belief that high design was not necessarily an exclusive privilege of the wealthy. Why couldn’t high design be given to the middle class? Today, the building bustles with residents of all nationalities, and income levels. An extensive third floor renovation is planned which will include amenities such as a gym and business center. With its stunning views provided by floor-­to-­ceiling windows and an open floor plan, Tigerman’s classic modern design could compete with any apartment buildings lining Chicago’s Michigan Avenue or Gold Coast.

The mural commemorates the history of the Boardwalk Apartments and its architect Stanley Tigerman. It is the end of a two-­year project beginning with an in-depth interview with Tigerman and extensive research into the building’s history. It is designed to represent the architectural philosophy of Tigerman who in turn, based his design on the architectural skeleton of Mies van der Rohe’s architecture, turning a building’s insides out, like the fruit of an orange. 4343 North Clarendon Condominium Association continues to be a source of pride for Tigerman who in a 2011 CHICAGO READER cover story, mentioned his joy to be buried in Graceland Cemetery within clear view, just down the street.

Stanley Tigerman and his wife, architect, Margaret McCurry plan to attend. Alderman James Cappleman will be there as well as other Chicago dignitaries and building residents.