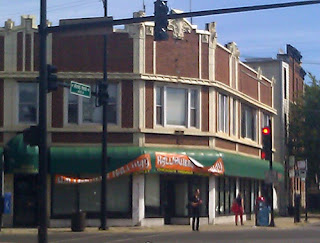 As some may remember, last November notice of a proposed liquor license/ tavern was sent to neighbors of 4001 N Broadway, the site of the former Arnold's.  A little Internet detective work revealed that it was the Menetti family who were behind the license request.

That would be the same Menetti family whose properties in Uptown (and other parts of the city) ended up in foreclosure, and whose poor management of Lawrence House and 4526 N Sheridan landed them in Housing Court and eventually led to a court-appointed receiver taking over the management of the properties.  They are also the former owners of Green Dolphin Street, a club which Ald. Scott Waguespack worked to have closed due to several violent incidents.

In December, Ald. Cappleman held a community meeting with neighbors of the property at Irving Park and Broadway, who overwhelmingly voted against the idea of issuing a liquor license.  Ald. Cappleman requested that the liquor commission deny the license request, based on the feedback from that meeting.

But the Menetti family apparently doesn't like to take no for an answer.  Here is an announcement sent out Tuesday night by Buena Park Neighbors block club:

"Tavern license appeal hearing for 4001 N. Broadway is set for May 28th.  Several months ago a group of Buena Park Neighbors met with Alderman Cappleman to raise their concerns about an application being made to the city to obtain a tavern license for the vacant space at 4001 N. Broadway.  Based on the input from this meeting, Alderman Cappleman requested that the liquor control commissioner deny the requested license. Since then, the corporation that originally applied for the license has appealed the denial and have been given a hearing date of May 28th.

We are letting know about this hearing as a public service to all residents of Buena Park and we encourage you, whether for or against, to attend this hearing to make your views known. If you would like more information on this, contact Alderman Cappleman and/or Buena Park Neighbors.

Below is a copy of the letter sent by the city about the hearing:

This letter concerns your written objection to the granting of a liquor license for the business located at 4001 N. Broadway.  The business wants a license to obtain a Tavern license.

I am an attorney for the City of Chicago, representing the Local Liquor Control Commissioner, Gregory J. Steadman, in this matter.  I am contacting you because you wrote a letter to the Commissioner or signed a petition asking that the liquor license be denied  because of the harmful effects that it would have on the community.

As you may be aware, the Commissioner has in fact denied the license application, and one of the bases is that the sale of liquor at this location would tend to create a deleterious impact on the surrounding community.  However, the applicant corporation has appealed the denial to the License Appeal Commission for the City of Chicago.

The law requires that the License Appeal Commission hold a hearing to review the denial of the license.  At this hearing, I will present evidence and testimony regarding problems in your community that are expected to arise if the license is granted.

The hearing to review the denial of the packaged goods liquor license is set for Tuesday, May 28, 2013, at 1:30 p.m. in Room LL 02 (Lower Level) of the Daley Center, 50 W. Washington Street in downtown Chicago. Your attendance is requested to demonstrate to the License Appeal Commission that your community is definitely opposed to this license.  The License Appeals Commission is strongly influenced by the number of community members who attend the hearing and testify as to why they are either in favor or against the issuance of a particular license.

I ask that you contact me as soon as possible if you plan to attend the hearing and would be willing to testify in front of the Commission.  My telephone number is (312) 744-4030.  If I am not available at the time you call, please leave your telephone number and the best time to reach you.

P.S.  If you know of other members in your community who also object to this license, please let them know about the hearing date, and give them my phone number.  Every witness is very important!" (emphases added by UU)

We're not against new clubs filling empty storefronts, and we're not against liquor licenses being issued. However, we have serious doubts about this one. We have to look at the track record of the applicants, and in this case, that look takes us no farther than Lawrence House, which generated more 911 calls than any other address in the 20th Police District while it was under the management of the Menetti family.

We look at the stabbings and shootings outside the Green Dolphin Street club while it was under the management of the Menetti family and ask ourselves if a club like that is a good fit for Uptown. We look at the many Housing Court appearances regarding the properties owned by the Menettis, and we look at the fact that the buildings began to improve only after the court took away the family's right to control their own properties.

We know many of our readers work in the Loop, and ask that you consider going to Daley Center during your lunch hour on Tuesday, May 28th, to let the Liquor Commission know what you think about the proposed liquor license requested by the Menetti family for the "Broadway Tavern."

Update:  Rep. Greg Harris sent UU a copy of this letter weighing in on the liquor license request: