Won't You Be My EX-Neighbor? 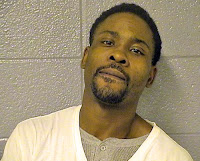 Yesterday's Tribune has a story about a woman who was allegedly robbed, battered, sexually assaulted, and held captive by her former boyfriend in Edgewater.  Then we saw the alleged assailant's address:  the 1200 block of Leland.

Laroy Jackson is being charged with "robbery, unlawful restraint, aggravated criminal sexual assault and domestic battery," according to the Tribune.  How thrilled we are to have this guy as a neighbor!  His background includes three prior convictions for possession of a controlled substance, as well as convictions for unlawful use of a weapon and delivery of a controlled substance.

We can only speculate about how he ended up living on the 1200 block of Leland with his criminal background.  Well, if he's found guilty, he won't be our neighbor much longer.
By Caring Neighbor - February 25, 2013