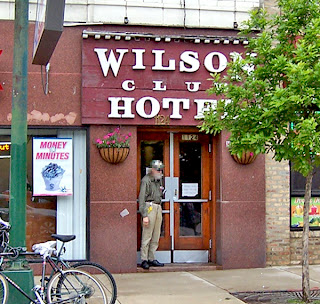 According to an article in the Sun-Times, Brendan Reilly and James Cappleman say that cubicle hotels, such as Uptown's Wilson Men's Club, are archaic relics of another era, and unfit for humans.

They are looking for improved conditions in the only two cubicle hotels left in the city, or else closure.

"Cubicle hotels — the last vestiges of Chicago’s “Skid Row”-era — would be forced to shut down or improve living conditions “not fit for human beings,” under a crackdown proposed this week by a pair of aldermen.

Read the article.  It's our opinion that people demanding more affordable housing in Uptown, as ONE is, would better serve those whose causes they champion, if instead they demanded that the owners of the existing affordable housing provide humane and safe conditions for their clientele.

Perhaps Wilson Club owner Jay Bomberg saw the handwriting on the wall, and that's why he commissioned a study of "alternative uses and exterior upgrades" from local architects MDT?
By Caring Neighbor - January 18, 2013