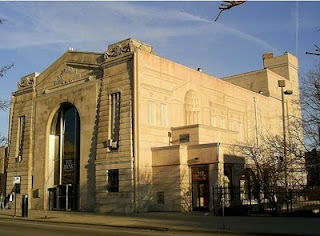 The former Wilson Avenue Theater/TCF Bank at 1050 W Wilson has been empty since autumn 2011, and on the market longer than that, but this week it was bought for $625,000 by Cedar Street Co., the developers behind FLATS.

We had nightmare visions of the century-old theater clad in a coat of battleship grey paint, but it seems instead that it's been bought as an investment while real estate prices are reasonable.  According to Illinois Real Estate Journal,

"Cedar Street Co. has acquired 1050 W. Wilson in the Uptown neighborhood of Chicago. The building was purchased for $625,000 and financed by First Bank & Trust Co. of Illinois.

Located at the corner of Wilson and Kenmore avenues, the three-story, 15,000-square-foot building on .23 acres was built in 1908 and is a large part of Uptown’s historic landscape once being a theatre and bank. Cedar Street Co. is seeking to secure a unique tenant that not only respects the grandeur of the space, but also adds value to the Uptown community."

For those concerned with the pace of construction of the FLATS buildings around Uptown, the article goes on to talk about some refinancing Cedar Street has done to advance the FLATS Chicago development process.
By Caring Neighbor - January 18, 2013