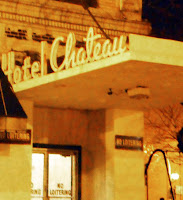 "For the second time, controversial Hotel Chateau owner Jack Gore could not be served the necessary paperwork to call him to court Tuesday, but officials did order hotel management to complete a few tasks," Lake View Patch reports of yesterday's court hearing.

Just a few minor things, like trying to ensure it doesn't go up in flames in the next week or so...
So while noted slumlord Jack Gore continues to play hide-and-seek with the process server, his residents are living not only in squalor, but in very real danger due to the condition in which the Chateau is being maintained.

For those who may not know, Jack Gore has a history of owning buildings with dozens of serious safety violations, and eventually losing them after failing to make the promised repairs.  Four years ago, he barred City fire inspectors from the Diplomat in Lakeview, which was described as a "tinder box."   He eventually surrendered the building to the City rather than pay hefty fines, ranging into the millions of dollars, after the City stripped his SRO license.

SROs are a necessary part of Chicago's housing stock and are a lifeline for people who can't afford more.  But Jack Gore apparently isn't thinking about the welfare of his tenants, let alone their safety.  Just like the tenants who were at his mercy at the Diplomat, the tenants at the Chateau are living in very real danger, while Jack Gore makes promises, and avoids being served with papers compelling him to face a judge.

The next Housing Court date for the Chateau is January 29th at the Daley Center.  Read the entire story in Lake View Patch.
By Caring Neighbor - December 05, 2012