Another Chance To Save The 145 Bus? 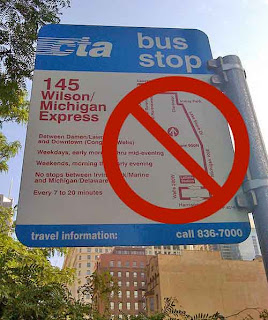 A reader sent in the following information.  If anyone is able to attend and give reasons to save this bus route from elimination, it would be extremely appreciated:

"The next CTA board meeting is THIS WEDNESDAY at 1pm. (see below). The meetings usually start at 10am but this one has a later start. It would be great if some folks showed up to request that the board reconsider its decision to eliminate the #145 bus. The public can comment at the meeting; well, five people can anyway.

There have been many, many instances that I've been on a packed, standing-room-only #145 that's at a time when there will be no alternate service should this route elimination go through leaving SO many riders without service. This cut makes no sense. With a million riders, the route brings in more money than the CTA pays for the drivers to run it. In other words, it is not only cost-efficient - it is generating a profit.

Should the CTA argue that it's about allocation of limited resources, then the question remains whether any of the decision-makers have ever sat and watched the nearly empty buses (like the #135, for example) running one after another during rush hour.

Most riders are unaware that the CTA board voted to cut this route. There are no signs on the buses or the bus stops about it. If the CTA is going to be so blatantly apathetic about the multitude it is inconveniencing and literally leaving out in the cold, it could at least give fair warning."

Here's a link to the CTA's webpage on how to make public comments at their board meetings.

As a refresher, the Wilson Avenue express buses will be cut off December 16th, leaving no way to get Downtown from Uptown for those who cannot access the non-ADA-compliant Wilson Red Line station.  A list of some compelling reasons for keeping the route were laid out in an earlier post, here.

If anyone can make the time to argue for the Wilson buses' retention, please go on behalf of many of your neighbors.
By Caring Neighbor - November 12, 2012