What's Going On At Somerset Place? 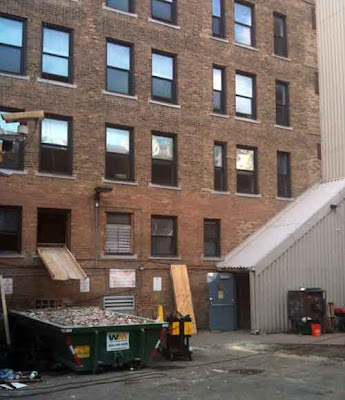 We've heard from several readers in recent weeks asking about the construction going on at the former Somerset Place, 5009 N Sheridan, which has been boarded up since March 2010.

Apparently there are the sounds of demolition work going on during the day, and plenty of debris has been seen in dumpsters around the building, indicating that work is ongoing inside.

However, one reader did some armchair investigating and says he can find no construction permits pulled for that address, leading him to question the safety of the demolition that is apparently going on within the walls.

He has reached out to Ald. Osterman, who says that no zoning changes have been applied for by the new owners yet and that they will have to go through the community process before a zoning change can be approved for the building.

Ald. Osterman also says he will look into the presumed current construction/demolition work.  Our reader says he'll let us know when he gets a definite answer back.

We are eager to see the Somerset become a vital part of Uptown again, but we want to see it done legally and safely.  Hopefully this will turn out to be the case.
By Caring Neighbor - August 30, 2012