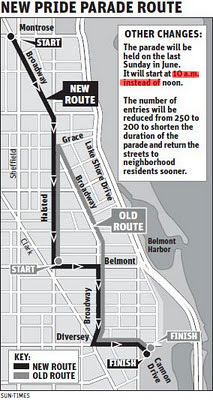 A reminder from Graceland Wilson Neighbors that Uptown will be a happening place on June 24th, and we need to be prepared to be hosts:

"The 43rd Annual Gay and Lesbian Pride Parade starts at noon on Sunday, June 24th. What many Uptowners don’t realize is that the parade will be starting here in Uptown for the first time—the starting point is Broadway and Montrose, proceeding down Broadway to Halsted and points south. Floats will be lining up as early as 8 a.m. on both sides of Montrose between Broadway and Clark; other parade components will line up on both sides of Broadway between Montrose and Wilson.

Parking restrictions will be in place on Montrose and on Broadway from Wilson to Halsted/Grace—residents who need street parking must plan accordingly. The Chicago Police expect the Wilson Red Line Station to be extremely busy, the 36 Broadway and 151 Sheridan buses will experience reroutes and delays, and street closures will disrupt traffic patterns, particularly streets crossing east-west across the parade route and staging areas.

In short, Uptown residents should expect very large crowds in our neighborhoods, very scarce on-street parking, and restricted ability to travel in and out of the neighborhood for the duration of the parade. Residents should plan ahead.

Representatives from Graceland-Wilson Neighbors and the Clarendon Park Neighbors have met with Alderman Tom Tunney, Pride Parade officials, and city department officials; we have been assured that there will be a good police presence, that Streets and San will be thoroughly cleaning immediately after the parade, and that the City will be closely watching packaged liquor businesses for violations.

Neighborhood associations and Alderman Cappleman’s office should be keeping the neighborhood advised about developments as the date approaches, and hopefully the Alderman’s office will be striking a deal with Truman College to allow parking there on parade day. We want to show the best face of Uptown, and ensure that our residents AND our guests safely enjoy the festivities."
By Caring Neighbor - June 04, 2012