And Then They Were Gone 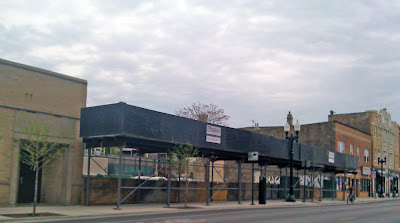 We've been watching since last Thanksgiving, when the city declared the three storefronts at 4415-4423 North Clark "Off Limits."  Earlier this month, the demolition process began.  As of last week, all that remains is a big pile of rubble and some scaffolding.  An ignoble end to three buildings that were 90 to more than 100 years old, but their glory days were long gone, and we hope to see something better replace them eventually.

We took a look at the 1928 city directory, and in those pre-Depression days, that part of Clark was bustling!  That one block was home to a restaurant, two grocery stores, a cigar retailer, a meat market, an awnings dealer, a shoe repair shop, numerous car garages (both for parking and repair), an automobile repainter, an auto wrecker, a cigar maker, Chicago Architectural Bronze Company, Faber Instrument Company, and a drugstore.  We hope to see its fortunes improve back to the days when it was a vital retail corridor.
By Caring Neighbor - April 16, 2012