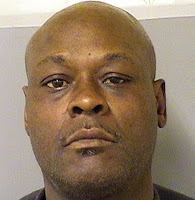 Seems Derrick King is back in the headlines, and back in jail.

A recap:  Mr. King was panhandling outside the Wilson L last December when he grew angry with a pedestrian who wouldn't give him money.  He followed the man and threatened to kill him, so the man called 911 and signed a complaint.  The incident made the newspapers when it was revealed that Mr. King was the same panhandler who had beaten and severely harmed a woman and her boyfriend in the South Loop in 2008 after they refused to give him a cigarette.  (You can see a UU post with more details about his past here.)

After the December arrest at the L, the 20th and 23rd District court advocates followed the case as it went through the court system.  Mr. King tried to intimidate them at the first court hearing, then missed the next two court dates, and was picked up and jailed after a warrant was issued for him.  When his trial came up, he was found guilty of misdemeanor assault and sentenced to 20 days in jail.

So it was a bit of a shock to see his face on the front page of the Tribune Monday evening, with news of yet another arrest for beating and kicking his long-time female companion, this time in the Lawndale neighborhood.  The article is here.

We hope that Uptown has proven inhospitable enough for him to stay away:
We sincerely hope that some judge will assign Mr. King to a post-incarceration program where he can learn to end the seemingly endless cycle of extreme violence, substance abuse, and jail time.  Until that happens, Uptown has pulled in the welcome mat.
By Caring Neighbor - March 08, 2012