2012 Pride Parade To Start In Uptown 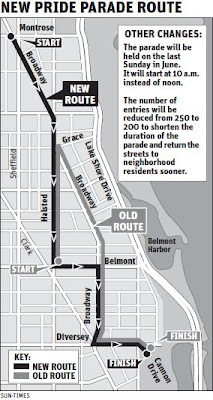 After massive crowds and uncontrolled drinking, the start time and route for the 2012 Pride Parade are being altered according to this story in the Chicago Sun-Times today. While the 10 a.m. start time is two hours earlier than usual in an effort to curb drinking, the modify route puts the start of the parade at the intersection of Broadway, Montrose and Sheridan, heading south on Broadway before turning on Halsted at Grace. This will directly impact thousands of Uptown residents, not only with streets closures due to the parade, but presumably the floats will be staged in Uptown on Broadway north of Montrose.

Here is some additional information from the Chicago Sun-Times article:
The number of entries will be reduced from 250 to 200 to shorten the duration of the parade and return the streets to neighborhood residents sooner.

And the route of the parade will be lengthened five blocks — from 17 to 22 — and dramatically altered to stagger crowds, add two CTA L stations to accommodate arriving spectators and reduce neighborhood choke points.

The city’s second-largest parade used to begin at Belmont and Halsted, travel north on Halsted to Grace before making a V-turn back down Broadway from Grace to Diversey.

That prompted complaints from area residents that the parade created, what Tunney called a “dangerous situation” that cut off access to emergency vehicles and made it difficult for area residents to get home.

The change will undoubtedly bring thousands of parade watchers to our neighborhood, and hopefully shed a positive light on Uptown. What do Uptown Update readers think of this parade reroute?