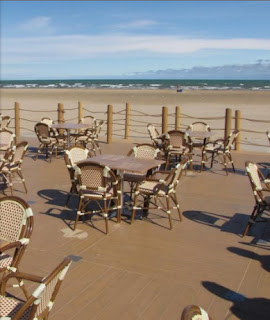 We heard from one of the owners of The Dock At Montrose Beach, who tells us there've been a lot of changes and improvements since last summer.  For starters, there's a bigger, nicer (3,300 square foot) patio deck added.  A spiffy new logo.  A website.  A new menu featuring seared tuna salad, fish tacos and Kobe burgers, among other things.  And... a rare lakefront liquor license, nearly four years in the approval process.

There's a soft opening planned sometime before May 20th, and The Dock expects to be fully operational for Memorial Day weekend.

We look forward to trying out the new menu and enjoying some lazy afternoons on the shores of Lake Michigan, margarita in one hand and fish taco in the other.
By Caring Neighbor - May 06, 2011