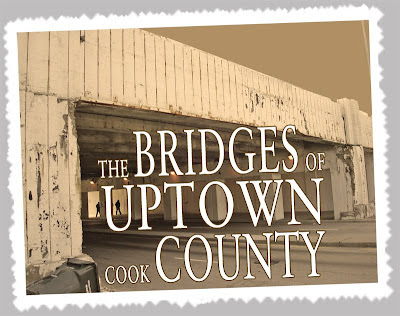 We said it three years ago, and it's getting worse:  Uptown's bridges are in horrible condition.

A report released Tuesday said that one in 12 bridges in Illinois are "structurally deficient" and require drastic rehab or replacement.  Greg Hinz of Crain's reports that "Passage of a new bill has been held up amid concerns about high levels of federal spending overall and a dispute over whether to raise gasoline or other taxes to pay for the work."

The Sun-Times mentioned the top five of these deficient bridges by traffic volume and two of the five are right here in Uptown -- the Lake Shore Drive overpasses at Wilson and Lawrence.

Click here to see our photos taken in April 2008 and reflect on this:  Nothing has been done to repair them in the interim.  They're actually in worse shape now.  The only thing that's been done to remedy the situation is the installation of giant cranks to prevent them from collapsing.  Scary, huh?
By Caring Neighbor - March 25, 2011