Groundbreaking For Admiral At The Lake 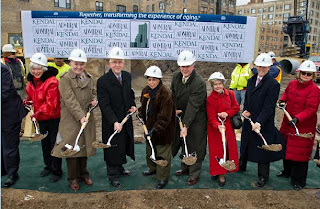 Finally, after many delays, it's on.

"On Tuesday, November 30, 2010, The Admiral at the Lake held a groundbreaking ceremony to mark the redevelopment of Chicago’s oldest non-profit organization dedicated since 1858 exclusively to seniors. Located at Foster Avenue and Marine Drive on the border of Chicago’s Edgewater and Uptown neighborhoods, The Admiral at the Lake, a life care/continuing care retirement community (CCRC), is being constructed on the site of its former retirement community. The new 31-story high-rise and a 4-story apartment building, to be built for $145 million, will replace the 11-story apartment hotel, built in 1920, which Admiral community members had occupied since 1960.

With future community members committed for more than 80 percent of the independent living apartments and with $202 million bond financing completed on November 19, this CCRC is based on the collaboration of the Admiral at the Lake and The Kendal Corporation, a not-for-profit, investing in Chicago for the first time."
By Caring Neighbor - December 08, 2010