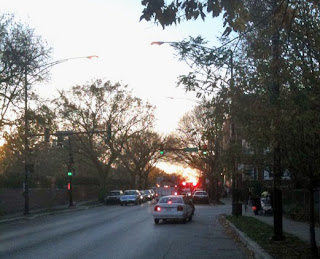 We're combining these two posts into one.  This is what we know:

1) at 5:15, three people, including a 13-year-old girl, were wounded at Magnolia and Montrose.  They were taken to Childrens Hospital, St. Francis and Illinois Masonic in serious to critical condition.

2) Later this evening, more shots were fired at 1010 Sunnyside.  At least one person was wounded.  It was later confirmed that one person died, Marlos Canteberry.

Around 9pm, the police were called to make a body removal at Illinois Masonic.  We're not sure from which of the two shootings the death resulted.  But one person is dead as a result of the shooting on our streets today, and let's not forget the person who was struck inside his home at Malden in the wee hours of the morning.

We're receiving multiple reports of shots fired at 5:15 this afternoon.  What a lovely image : trick or treaters running for cover from gang gunfire.

"I live in the 4400 block of Magnolia.  I just heard 9 or 10 gunshots that appeared to come from the corner of Magnolia and Montrose.  This all happened at 5:15 pm.  I saw one younger black man running up Magnolia (white t-shirt, dark jeans).  I called the police immediately and gave them the description.  Police, paramedics, and fire crews showed up within 3 minutes.  I looked out my window to see trick or treaters hiding behind cars and trees on Magnolia.  This all happened in plain view of multiple children and families in broad daylight."

In other news, Ald. Shiller was quickly on the scene, expressing her concern for the children of our neighborhood and promising to work with the police in taking steps to end the violence that has plagued her ward all year.  Okay, we're lying on that last part.  Trick or treat!

Update:  We hear the police are putting up red police tape.  Not sure what this means, but we have our suspicions it's not good.  A commenter reports that he thinks the victim was being covered up.

Update 2:  We're hearing from people at the scene that someone was hit, but it was minor.  This is all speculation.  Just passing along what we're hearing, but nothing is confirmed yet.

Update 4:  A police officer tells us in the comments that red tape marks the inner perimeter of a crime scene and has nothing to do with type of injuries.

Posted at 8:30 PM:  "Now we're hearing that there are blue lights and police tape around Sheridan and Sunnyside.  Anyone got any information?  We've heard this from three people now, no details."

ChiTownPhilly said... I can confirm that there is yellow police tape blocking sunnyside off from sheridan halfway to broadway. There were four squads on the scene at about 7/730, looking around the scene. I did not talk to a police officer, however, the security guard at Jake's said that there was a shooting and, possibly two people hit. He also said that the suspects and or/victims all ran towards Clarendon Park. It is all heresay, but given the day's events, is very plausible.

Victoria Rice said... I live right off Sunnyside and Sheridan and heard 2 gun shots around 630-7 o'clock, shortly after (within minutes) several cop cars, fire truck and ambulance were on the scene, still don't know what happened. Makes me want to move though...

just some guy said... Fire dispatched to clean the sidewalk around 8:30. The street is open now, but there was red tape blocking the sidewalk on the north side of the street between the alley and Sheridan
By Caring Neighbor - October 31, 2010