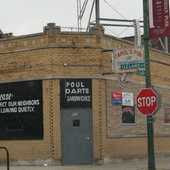 A reader sends us this info:
"An officer claimed that there was a very bad brawl between some guys at Carol's Pub. A small section of Clark has been closed off on Leland and Clark.

However, for a "bad fight", the cops have been hanging around for quite some time. At least 8 cop cars are present."

Update via Chicago Breaking News:
A 27-year-old man was critically stabbed in an Uptown bar fight Wednesday evening, police said this morning. The presumed assailant is in custody.

The victim was taken to Advocate Illinois Masonic Medical Center in critical condition, he said.

Update 9/8:  The Sun-Times says a patron who had been banned from Carol's got into a drunken fight with a father and son team, who stabbed and clubbed him.  He is fighting for his life.
By Uptown Updater - October 06, 2010