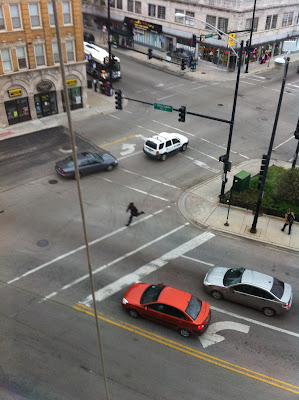 Once more, the thugs in the gangs prove they don't care who might get in the way of their bullets.  We're all just collateral damage to them.

Unbelievably, readers report that 5-6 shots rang out near the Jewel shortly after 4pm on Sunday afternoon.  Lots of people there, including kids.

A reader sent in this dramatic photo and said, "Here is the suspect running west on Montrose after he shot several shots."  Other readers report that police were on the scene within a minute and in pursuit.

We wonder if the alderman (who is still Helen Shiller, although she seems to be unusually absent since her "I'm done" announcement) might make a statement about THIS shooting, since it took place just across the street from her beloved Wilson Yard.  Or is she sticking with the old "la-la-la-la I can't hear you" routine, since "crime is not her issue"?  Here's news, Alderman:  You might be able to pretend it isn't happening, but the folks putting groceries in their cars at Jewel on a Sunday afternoon didn't have that luxury today.

Update:  Commenters on UU's Facebook page give details, including "Multiple police vehicles just west of the intersection of Broadway and Montrose... on Montrose. Westbound Montrose is blocked off from Broadway."
By Caring Neighbor - September 26, 2010