Even More "Broken Windows" In Uptown 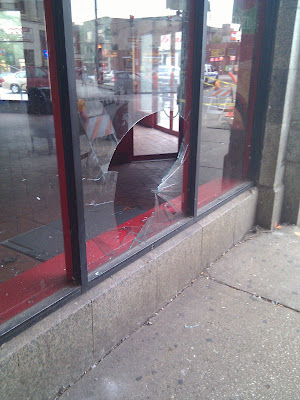 A reader sends in the following pic and info from the former Popeyes location in the Wilson L station:
"How ridiculous is this? The CTA was out here last week and replaced the broken windows that someone busted/shot out and now there are even more busted out windows (one pane directly to the left of this is bashed in as well)! Someone could have easily crawled inside the former Popeyes through this window. The last time these windows were busted out, they were boarded up and a mentally ill person ("You Selling Secert") scribbled on literally every square inch of the boards covering the window frame. Why can't the CTA get surveillance cameras on this corner and catch these morons in the act? I called 911 so hopefully the storefront will be secured."

Update 9/19: There are beer cans strewn about inside Popeyes as well as bags of junk. Squatters have invaded. There is also an American flag draped over the front counter.
By Uptown Updater - September 18, 2010