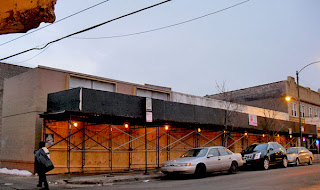 Update: A reader wrote to say, "The building at 1104 W. Argyle was brought into demolition court by the City on an emergency basis. When the owners produced evidence that they were serious about fixing the building, the Judge allowed them time to fully rehab it. They are back up in court on March 2 to monitor their progress. So far, I have no info about what is going into the storefronts. If I find something out, I will let you know."

Finally, it looks like something's happening at the site of the fire on Argyle that destroyed several stores during the summer of 2008.

The helpful folks at Edgewater Community Buzz wrote to say: "I noticed from the Red Line train last night that it looks like they are working on the 2 (or more) stores on Argyle, just east of the El tracks, that were damaged by a fire some time ago. There is a bobcat-type piece of construction equipment in there clearing out the rubble. The roof is completely gone."

And another reader noticed that the gut rehab extended down to the former site of Sun Wah BBQ, which wasn't damaged by the fire:  "I'm wondering if you or any readers might know what the story is with the building on Argyle (between Broadway and the Red Line) that Sun-Wah BBQ just vacated. It seems like they are in the process of gut-rehabbing the whole building, but I was wondering if anyone knew if there were plans in the works for something new to open up there."

Readers, anyone know the plans for the building?  In any case, we're delighted to see something there besides burned-out storefronts.
By Caring Neighbor - January 19, 2010