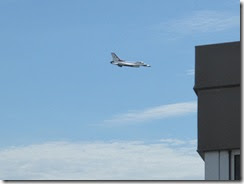 Those of us who were awakened by the sound of fighter jets over Uptown on Monday now know it was the Air Force's Thunderbirds, thanks to the fast camera of one of UU's readers and frequent contributors.

"Before 10am today the Thunderbirds came flying by! Looked them up on the internet and when they would be performing and then linked to them in a short blog with a few photos that I could capture with my sleepy eyes. Wonder if the stealth bomber will unexpectedly appear again this year?!?"

Take a look at her photos here, including the one above.