Show Us The Money! 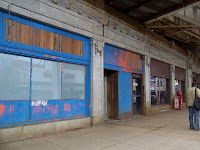 A savvy reader writes in:
Roaming through some older articles, I came across this beauty:

From a November 2007 News-Star article by Lorraine Swanson:

Asked about the Wilson Avenue CTA Station, Shiller acknowledged that while the station was never part of the Wilson Yard TIF redevelopment plan, TIF money is being set aside “informally” if the CTA doesn’t have the capital dollars to pay for the station.

“We can at least leverage TIF dollars for federal monies that the CTA can no longer leverage because the state has been requiring that it pay off that money every year, and unless (the debt) is restructured, it’s not going to change,” Shiller said.

UU Note: Did anyone mention TIF $ at the meeting, last week?

Update: From a State Senator Heather Steans email blast:
"Significantly, the legislature passed and the Governor signed a mini-capital bill of $3 billion. This roads and transit bonds program will create jobs in time for the current construction season and requires no new revenue. It maintains a 2-to-1 formula for roads-to-transit, meaning $2 billion is available for roads and bridges repairs, and $1 billion is targeted for transit. In the 7th Senate district, which I represent, state road projects that are included are:
Sheridan road from Arthur Avenue to Juneway Terrace
Broadway and Sheridan Road from Devon to Hollywood - the traffic signal interconnects
Lake Shore Drive viaducts at Lawrence and Wilson

Significant dollars will also be available to resurface various local roads throughout the district. The transit funds will also provide significant dollars to Chicago Transit Authority, including work on the Red Line. Congresswoman Jan Schakowsky, State Representatives Harris and Osterman, and Aldermen Moore, O'Connor, Shiller and Smith and I have been meeting with top CTA officials to ensure the Red Line and its station are the highest priority."
By Uptown Updater - April 27, 2009